As I was wondering how to write this article, I began to realize that Neofinetia falcata is a sort of ‘no fly zone’ in many people’s minds. Indeed it seems that one has to fly to Japan to get these gorgeous gems. At least this is the case when it comes to the Japanese varieties. There are many aspects to this fascinating species including history, varietal characteristics and cultivation, just to name a few. I will limit this article to a description of this plant and to its unique history so that you may appreciate a little of what makes this plant so special. Neofinetia has recently been transferred to Vanda and for the purposes of this article and web-site, I will retain the name Neofinetia as the plants are so unique. Welcome to the wonderful world of Neofinetia falcata! 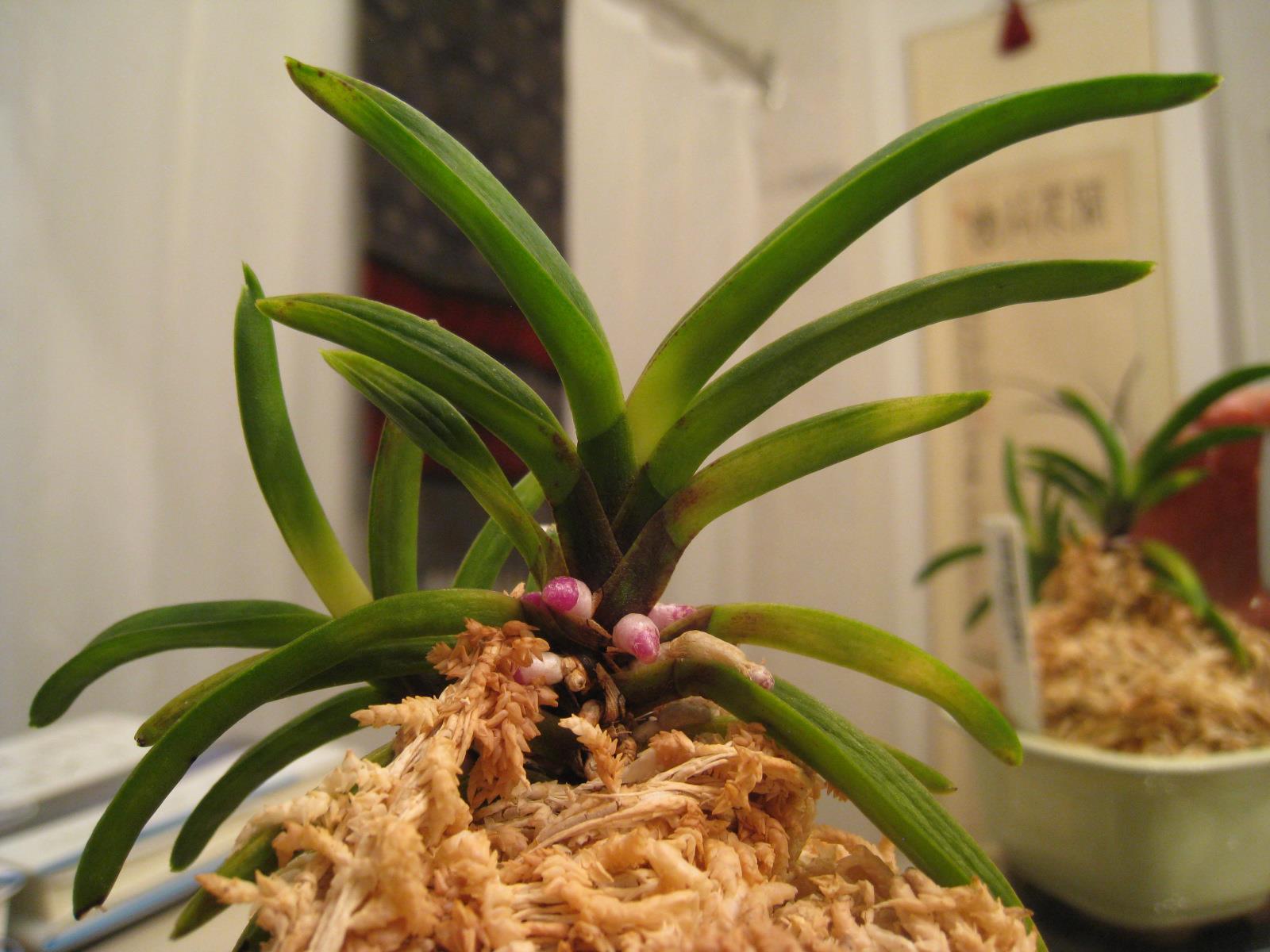 Yes! Neofinetia falcata is a single species of orchid native to Japan, Korera and SE China. If there is one thing I would like you to take away from this, before we look at its history, is that Neofinetia falcata is quite simply a single species that has transformed itself into thousands of varieties – one species with over 2300 distinct varieties! These varieties have evolved from the regular or ‘wild’ form that we have for years seen for sale in North America and it is called fūran in Japanese. Fūran means wind orchid. In Japan, Fūran, can be found from the Southwest Kantō Region to Okinawa. In the wild, the roots of fūran grow firmly attached to trees and rocks and the flowers appear to fly in the wind. The plants are small and produce extremely graceful white flowers that have a fantastic scent, which incidentally is one of the most complex in the orchid world, with over 90 compounds in it’s scent.

What makes this plant so interesting and unique is its place in Japanese culture and history. The historic appreciation of this plant is unlike any other in the orchid world and Neofinetia are steeped in a rich tradition of collecting, starting in Japan’s Edo Era from 1603 to 1868. For the last 400 years, the Japanese have been collecting Neofinetia falcata that exhibit unique traits that are visibly different from fūran – the wild form. Fūran with unique characteristics were given an elegant name called fūukiran which translates to ‘the orchid for the noble and rich’. Collectors searched for plants with different leaf forms, including variegation in the leaves, or even leaf textures. Recently coloured flower forms were discovered. It is very important to note that to the Japanese the appreciation of fūukiran is a form of art and the cultivation of fuūkiran is a part of Japanese culture and heritage.

Although there is evidence of the appreciation of fūkiran before the Edo Era, it was during this time that fūukiran was furiously collected. This was a calm and peaceful time in Japan, a time when engei or traditional Japanese gardening flourished. Some of the plants collected at this time were Calanthe, Cymbidium goeringii and karan, Dendrobium moniliforme and Omoto, the latter a very interesting plant but not an orchid. Collectors were on the lookout for trees, grasses and plants with weird variegation. Indeed collecting weird and different forms of plants went back to at least 1300AD. During the Edo period, it was considered fashionable to collect these kinds of plants and this was considered the first boom of fūukiran. All of the above mentioned plants often exhibit weird mutations or forms and some of these like the Omoto and Dendrobium moniliforme could fetch astronomical amounts. A single mutated Neofinetia falcata growth could be valued at the cost of buying or building a house! Ienari Tokugawa, the 11th Shogun of the Edo Era was a serious collector of fuūkiran. People within the Japanese hierarchy would feverishly seek out mutated fūukiran to present to the Shogun as gifts.

So fuūkiran were indeed plants for the rich and wealthy. Appreciation of a fūkiran was an interesting event. The Shogun would have a gold or silver net covering the fūkiran. To look at them one would use the respect given to a samurai sword. When the flower was in bloom, the Shogun would hang the plant outside the carriage when he went out. Things were not always rosy for fuūkiran. At the end of the Edo Era, Japan experienced a period where lavishness and elegance was prohibited. In 1868, imperial rule was restored in Japan during the Meiji Restoration (1868-1912), and with it came a renewed appreciation for fuūkiran. The Meiji Government encouraged culture from Europe and North America including the introduction of Western orchids. In fact Western orchids became very popular to collect albeit only the wealthy could afford them. This new craze of course took its toll on the popularity of fuūkiran but several crazy collectors continued to keep them.

Fast forward to the 20th century. Modes do change and fūukiran collecting suffered from time to time, however there were those who remained guardians of this honoured and respected tradition. The second Neofinetia boom occurred between 1927 and 1943 at which time the plants were very expensive. It was said that when one bought a fuūkiran, he was subjected to have a party at a restaurant to “unveil” the fuūkiran. However, at this time, the only people who could enjoy fūukiran were those with a high social status. Everyday people had no chance to enjoy fūukiran. Most importantly, in 1939, the All Japan Fūkiran Society was formed. Following WWII the Japanese were in no mood to enjoy fūukiran; however two key events triggered the modern revival. In 1970 a book called ‘Fūukiran’ was published in Osaka and an artistic orchid show was held in Japan in 1973. From then until now, fūukiran suddenly has become more accessible to ordinary people.

Today fuukiran may be enjoyed by all. It is important to note that the All Japan Fuukiran Society does not base the value of the plants on North American or European judging standards and the desirability is determined by its own standards and rankings. Indeed one of the most important things to consider is finding and presenting the front of the plant! Since the beginning, the Japanese have published hierarchy charts for the most valuable of the Neofinetia varieties, but this is for another article! My own trip to Japan was eye opening. I discovered that these are amazing gems, compact and not difficult to grow! and although you do not need to mortgage your house to buy one, you may still need to fly to Japan to add your name to a 10-year long waiting list for the most rare varieties. The Japanese were very accommodating; I even learned correct potting techniques from the man who reports yearly for the Imperial Household. I am pleased to share this information with you and to make these plants readily available in Canada. This is the first of a series of articles on this species as the traditions surrounding fuukiran are rich. These are truly amazing orchids, unlike any others!

With the generous assistance of Michael Hwang

Terry is a Neofinetia specialist in Toronto with one of the largest Neofinetia retail collections in Canada.